Half Hitch – A double exposure of past and present

I’ve had a soft spot for Camden since I was young. It reminded me of Brighton, where people were colourful and inventive and most importantly didn’t judge each other. It’s been my favourite pocket of London for as long as I can remember. As it transpires, under that bright and bubbly surface lay a deep history of distillation of one of my favourite spirits. At the age of 15 I can remember looking down the canal. Little did I know that buildings I saw and the surrounding landscape once housed a 20 acre goods station complete with gin distillery, set in motion by illustrious Brothers Walter and Alfred Gilbey. The site handled everything from distilling to bottling to shipping all over the world. Almost lost to the sepia pages of an old history book, the story is being continued and brought back to life in the form of a small batch gin, handcrafted in a micro distillery in a humble but prominent premises in West Yard, Camden Lock. The premises was once the blacksmiths, where the shoes were made for the horses that pulled those gin bearing barges some 150 years ago.

Founder Mark Holdsworth’s love and pride of his work is difficult to describe. Despite his 16 years previous experience, including with brand giant Barcardi, it’s still a brave thing stepping foot into the world of gin, setting up a small business and swimming with the big fishes. Even with this, he’s not the only one, but he’s got a very good idea. Being a local man (he worked at Camden market when he was a teenager), his knowledge of the area is comprehensive and driven by a genuine interest that most historians will understand. On arrival we go for a walk around the market, gin in hand, to the bridge over the canal, where he points out the old W & A Gilby distillery building and the Interchange Building complete with Interchange Basin known as ‘Dead Dog Hole’, created to take six horse drawn barges a time for loading (the half hitch knot being used to moor them). There was even the Gilbey Express railway that used to export gin to the dockyards and all over the world. Mark must also take credit for the introduction to the website which explains with a kind of magic how ‘those who walk the surrounding cobble stones are blissfully unaware of its history”.
(View from the canal photo credit geograph.org.uk)

The botanicals used continue to allude to the old photographic scene developing in my mind, the smell of key botantical single estate Malawian black tea, with pepper and Calabrian bergamot, the smoky air smelling faintly of English wood and hay fed to the working horses. The shouts of people hard at work, in an era that slowly drifts away from our current day, leaving the staunch remnants of architectural wonder, museums and period drama. Still, the distillery is a beautiful homage to those times as well as now; fusing modern distillation techniques with the old. Half Hitch use a combination of tinctures, a traditional column still and a vacuum still (the sight of it really took me aback when I arrived), a wonderfully new and scientific approach as overseen by Mark’s resident distiller Chris Taylor, formally of COLD who holds a brilliant scientific knowledge. A chemistry graduate from Warwick, he also has a professional qualification from the Institute of Brewing and Distilling.

The vacuum still is a fantastically futuristic piece of kit. Reminiscent of school days in science labs, the ability to lower the boiling points of botanicals allow more fragile flavours to be released. It’s only able to process a small amount at any one time, but by doing this to add to the traditional distillation and blending with tinctures gives a whole extra level to the flavour spectrum to play with. Tinctures are a lovely homage to old (a traditional process for medical purposes of using alcohol to extract the flavour of more delicate botanicals such as the tea). Half Hitch are indeed, incredibly experimental and have the set up to facilitate it. I was lucky enough to try a little of the ‘pickled onion monster munch’ variety. The preservation and balance of the flavour was mindblowing from what was in essence a packet of crisps and it had me immediately thinking of all the other flavours there were in the world to play with. Mark explains their ‘ethos is using the right production technique to get the best out of each botanical’ and they are very proud to use high end botanicals too.
(Mark with vacuum still to the left photo credit Boutique Barbar Show).

The gin itself is just wonderful. I love the colouration taken from the tea as this further alludes to the sense of days of dirty faces, smoky clothes and old letters blowing in the streets. There is fantastic complexity to the earl grey type flavour that I can’t help but imagine the Gilbey’s celebrating. Orange is a key garnish to both cocktails and G&T’s as it naturally coaxes out the woody notes and bergamont citrus. If you need some more ideas for drinking then check the cocktails page on their website which has a few twists on old favourites. Bottles can be ordered online direct from the Half Hitch site or from a number of stockists and are even available in prestigious stores such as Selfridges. 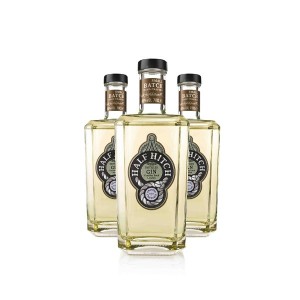 Mark first stumbled across the history through his daughter who is educated locally. Further to this he discovered further information from local heritage campaigner Peter Darley, founder of Camden Railway Heritage Trust. Walter and Alfred Gilbey began their enterprise after being discharged from the Crimean War and returning to London. They started with wine, moving to the Camden premises in 1869. Camden was a particularly good location due to the London Birmingham Trunk Railway (built by Robert Stephenson and the first of it’s kind in the world to enter a capital city) and setting up their gin distillery in 1871. During this time the landscaped changed with basins being enlarged and buildings being changed however was fit for purpose. A lot of this can still be seen today and it’s an important part of the local history that is too often missed. (I’ve linked most pages in this article, but further information on the history of W & A Gilbey can be found at various sources, most notably the Gilbey page on Peter’s website, with additional information on  the Gilbeys on a local history page and Camden’s Railway Heritage from the Friends of the National Railway Museum). It’s this history that Mark appreciates and it occurred to him that it had been 50 years since 1964, when the Gilbey industry had moved to Harlow and with that he decided it would be a nice idea to start making gin there again as an ode to its monumental past. 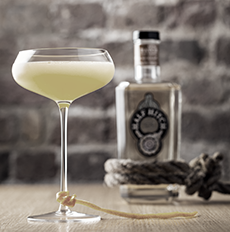 This mix of old and new is to me, the heart of Half Hitch. Many gins allude to their history, but it’s nice to see one where history and its inevitable future wrap around each other and start to grow into something else. The foundations of idea lay as they’ve done since 1869, and history is revived through that mix of old and new, creating the giddy glory of taste and smell achieved through knowledge and techniques that would have had our gin making ancestors as fascinated as we are when something allows us to see back in time. As the years go on connections to our past are lost. But with people like Mark creating quality gins based on an lost history, he is inadvertently bringing those eras together and tying them tight with a round turn and two half hitches of a rope knot.