Amidst the hustle and bustle of London City, nestled quietly down Bride Lane and just out of reach of the shadow of St Paul’s Cathedral; sits the humble entrance to COLD or to those in the know, the City of London Distillery.

The distillery opened in late 2012 and was the first within the City of London Square Mile for 200 years, (the Victorian gin craze has a lot to answer for). The Square Mile, or ‘City of London’ is a city inside a city, with their own Mayor and police force…so it makes perfect sense that they should have their own distillery.

So how did COLD come about? In 1967 a gentleman called Jonathon Clarke was a 16 year old dishwasher in the golf club/bar that previously occupied the premises, living on £32.50 a week. He would go on to purchase the freehold in 1997 and at 50 years old would get into gin and tonic, eventually becoming Master Distiller of COLD.

Descending down the stairs away from the close heat of outside, the understated and subtle entrance hides a beautiful speakeasy style underground bar that opens up into a blissfully relaxing space that feels a world away from the busy streets just above. Today I’m meeting Alfie Amayo, Brand Ambassador and COLD know-it-all for a distillery tour and tasting and boy, does he know a trick or two! Despite being not long back from a business trip to Switzerland, he’s excitable and engaging, with his torrent of knowledge being broken down into sizeable chunks by pausing to ask questions, keeping me well on my toes. He’s full of fantastic gin related tit bits such as the ancient medicinal uses for juniper, including its use during the bubonic plague and as a contraception (not to be tried at home ladies and gentlemen, there is little proof it worked).

The distillery is a beautiful set up and it spotless. Approximately 9ft x 14ft in size, it’s made up of Jennifer and Clarissa, 2 x 140L copper pot stills and named after the 2 fat ladies. Also a fabulous 7 level column still, which really is very clever indeed. The first step is cleaning the spirit. White spirit, which can be made from starchy materials such as grain or potato is brought in, (it’s actually quite rare for a distillery to make their own). In this case it’s wheat based and through Jennifer it’s cleaned to remove as much of the methonal as possible.

The spirit is mixed with water then heated by an electric coil (as we know alcohol is incredibly flammable and despite the bomb proof glass surrounding the equipment, we certainly don’t want a explosion). It’s made up of methanol (the bad stuff) which evaporates at 67.4deg, ethanol (the good stuff) which evaporates at 74deg and water, which as we know evaporates at 100deg (all Celsius). During this process the sulphites react with the copper, making copper sulphite (surprise) which needs to be cleaned from the walls of the still regularly. This over time thins the metal, meaning a full replacement is required very 10 years or so. Not a cheap endeavour when we’re talking highly sought after German Carl equipment. In fact, in just 3 years, public demand means the waiting list has soared from 4 months to 18, which is perfect testament to the fabulous gin revival that we’re lucky to be living in, well I feel blessed for certain.

The 7 plate column still then filters, as the vapour rises it hitting the metal sheets, cooling it down and separating the methanol and ethanol by condensation. Ethanol comes out at 95% and Alfie explains the finer details that it will always react with the environment to be at 95%, higher levels are only achievable in a controlled environment. 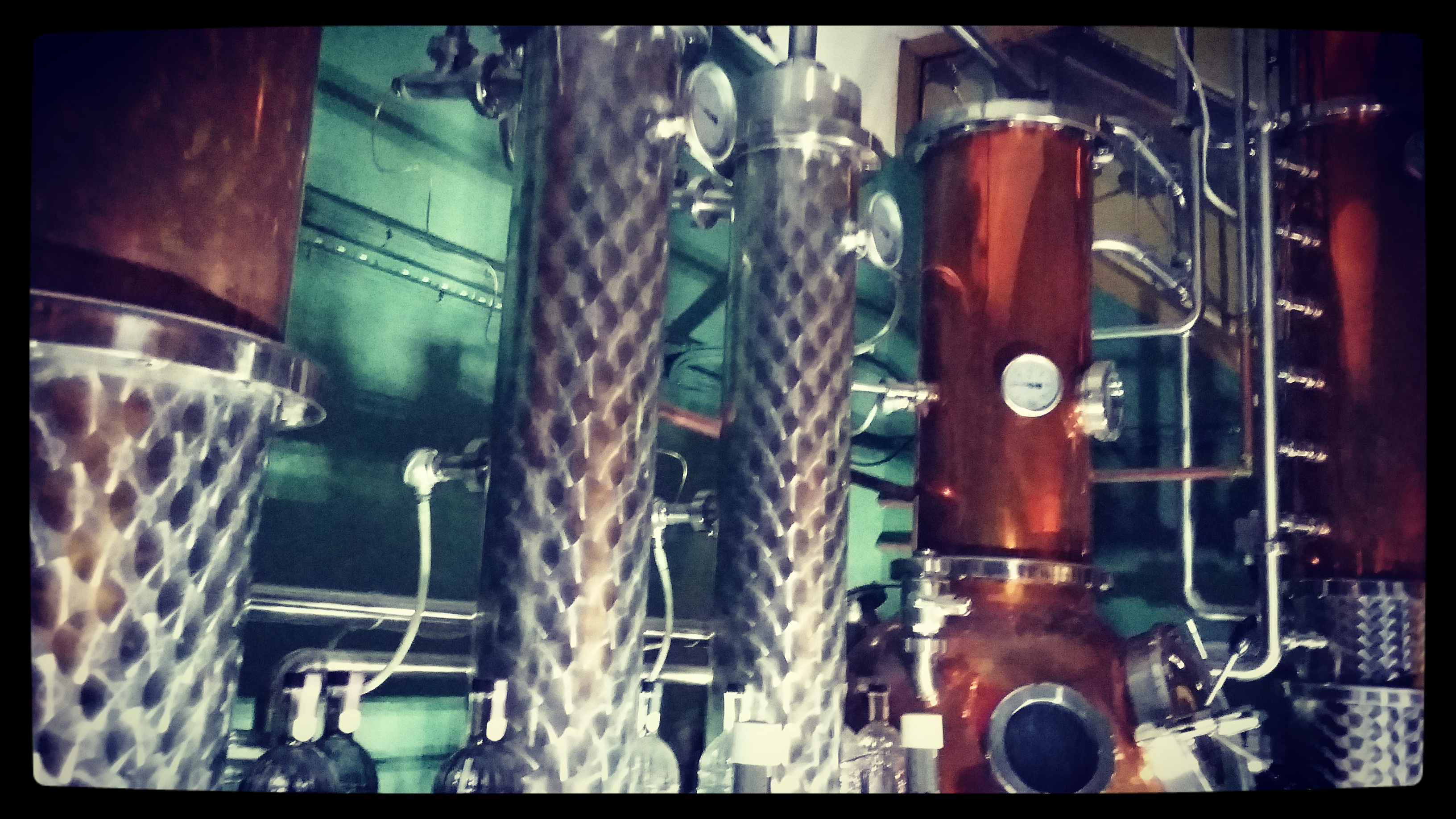 Once the spirit is clean, the single shot distillation can begin with Clarissa. Micro distilleries such as this, producing 200 bottles per batch can use the single-shot process; the botanicals, alcohol and water being distilled into a liquid where only water is added. Companies making larger batches need to use the multi-shot method, where are the gin ‘concentrate’ is created through distillation and then watered and sugared down into it’s final form.

It’s this single shot method, that requires full attention and care from the distiller. A distillation has to be watched at all times as the changing pressure can alter the times and volumes and each batch must come out perfectly. There is just no room for error when there’s no way of altering the final taste. The botanicals are put in the still with half alcohol and half water. This is to prevent them from getting closer to the coil and burning as the alcohol evaporates as this would impair the final flavour. He admits after playing with different waters to see how it would affect the final taste, they prefer to use water that’s been purified through a reverse osmosis machine. It’s interesting to note that pure water is actually quite dangerous for us, but when it’s mixed with alcohol it’s ok, thank goodness.

Of every 80L, the first 500ml distilled will be the methanol, or the ‘heads’, this is collected in a jug and discarded by a company in an environmentally friendly manner (there are different methods such as it being sold on to make nail varnish remover), the next 63L is the ethanol or the ‘heart’ and is collected in large, metal churns. The ‘tails’ left over from the process consist of broken down compounds and are not used in the gin.

Alfie takes me through a room full of mini stills (for gin making classes), to the tasting room which is stacked with different gins and small jars full of different dry botanicals. Here we get to grips with the individual smells and tastes of piney juniper, coriander to add spicey and citrus notes, liquorice to sweeten and angelica to give the flavour a good earthy base. These are the base flavours for City of London gins and there are different varieties that have their own twist. All are made by forefather, Jonathon Clarke, bar the Christopher Wren gin, which I have read good things about and incredibly eager to try. The bottles are new, designed especially for COLD and take inspiration from their neighbour, St Paul’s Cathedral.

No1. City of London Dry – 41.3% – Amongst the base 4 botanicals, there is a wonderful combination of orange, lemon and pink grapefruit which gives a lovely zesty finish. It’s a delicate dry gin with a superb flavour and winner of the Silver Award for the International Wine and Spirits Competition 2015.

No2. Christopher Wren – 45.3% – Created by Tanqueray distiller Tom Nichol, this was the one I’d been eager to try, with the addition of sweet orange, the flavour is divine. Named after the architect responsible for rebuilding St Paul’s Cathedral after the great fire of 1666, this gin proves itself as an architect of flavour by winning Double Gold at the San Francisco World Spirits Competition 2016.

No3. Old Tom – 43.3% – I’m a fan of Old Tom gins. As well as a bit of history (you can read more on this in my A fantastical history of gin), my palette likes a sweetened gin if it’s done right. Distillers have to be careful. Sometimes they can be too thick, almost syrupy in flavour and consistency. I have to say, this Old Tom is brilliant. Really delicately flavoured and on the nose with balance of cassia and cardamom spice and a slight hint of sour from zesty orange and lemon.

No4. Sloe gin – 28% – Made with Blackthorn berries, this is an excellent example of a sloe gin. A slow gin has to be sweetened as it’s just to sour on its own. Again, COLD have delicately sidestepped over sweetening with a well balanced sloe gin that leaves a tingle of tartness on the tongue. This is not surprisingly, the winner of Silver-Outstanding Award in the International Wine and Spirit Competition 2015.

No5. Square Mile – 47.3% – Similar base to the dry gin, but with a little tweak and some extra strength. Coriander is used to give additional citrusy flavours as too much citrus would make the drink to oily and cause it to turn milky when added to tonic. This gin is a well deserved tribute to the home of COLD. Winner of the Gold San Francisco World Spirits Competition 2016.

After a few drinks I was comfortable and heady so I stayed talking all things gin with Alfie for quite some time and to be honest, I could have stayed longer. COLD is a beautiful place, steeped in history and passion from the people that work there. Everything alludes to their love of gin, from the delicacy and complexity of flavour to the constant homage to their history. Through Alfie’s time and patience I probably learnt more of the technicalities of craftsmanship than any of my meetings to date. I can’t recommend it here enough, at minimum for a drink or ideally for a distillery tour/gin tasting because it’s a brilliant experience that’s fun and oh so interesting. And please, please do yourself a favour and seek out the Christopher Wren. It’s gorgeous.