This January sure is blue, huh? Dull days, chilly drafts, cold feet. There’s a lot to dislike. But January does have some good points, and one of my favourites is the feeling of comfort. Being wrapped up all warm when it’s cold outside is just the best. And there’s nothing more cosy to enjoy inside, than a hot bowl of comfort food. Hearty, wholesome fayre that is good for the soul.

May I present my ‘Chickeny’ Vegetable Stew with Cheesy Mustard Dumplings!

Why ‘chickeny’? Well firstly I apologise to the vegetarians and vegans in the room, as this sort of terminology is often used to describe chicken equivalents. This stew does have chicken in it, but not much. The reason being, I had some leftover scraps from a chicken I had roast the day before. It wasn’t enough to make a meal, but I hate wasting food. I love the goodness of a vegetable stew, and with the fella currently down with Covid, I’ve been feeding him up with all the healthy stuff I can. So, this stew is mostly vegetables, but it has that bit of chicken in there which gives it extra flavour. Let me be clear, you could easily not use the chicken, or chicken stock, and make a perfectly good vegetarian version. And it would only need a couple of tweaks to make a vegan friendly version too ( a cheese equivalent for the dumplings and doubling up in the veg suet instead of using butter). I’ll try and detail this in the ingredients as I know 75% of you would have jumped ahead to the recipe already, and I don’t blame you. Just show me the recipe already!?!

The boozy segment of this recipe is white vermouth. Any recipe that calls for wine can call for vermouth. In fact, I would almost always go for vermouth over wine. The truth is it’s an aromatised and fortified wine, so it’s mightier in flavour and has incredible herbaceous details that wine just doesn’t have. These will contribute an extra level of complexity to your dish. I’ll be honest you could easily use more than the 1/2 cup I’ve suggested. See how you feel on the day.

I did cook this on the hob, hence it’s a stew, despite popping it in the oven at the end to brown off the dumplings. You could have cooked the whole thing in the oven, then it would be a casserole. Please note! If you’re cooking it on the hob, the heat comes from below so you need to stir it every now and again. If you’re cooking it in the oven, the heat comes from all angles so you don’t need to stir as much. I like being in the kitchen, so I tend to hang around there, keeping an eye on food when it cooks, but I appreciate that’s not great for busy people.

I’m a bit of a chaotic cook. And this is a first attempt recipe that I concocted with things I had. I’d suggest you could easily use more cheese and mustard in the dumplings. Everything else worked out pretty good, but I’d love any feedback. 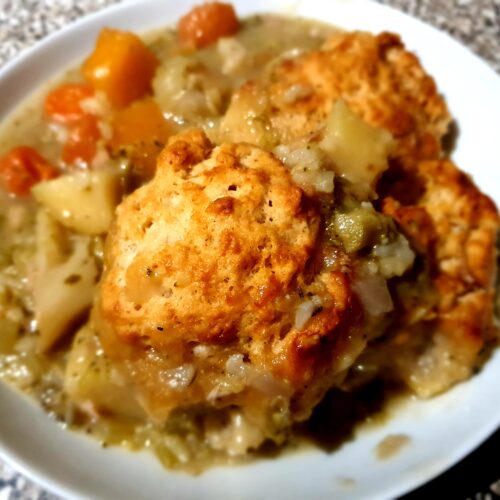