I was lucky enough to stumble over Hernö Gin when a good friend gave me a box of various gins to look over and potentially write about. Hernö was there, both dry and sloe varieties. As I worked my way through tasting it was the sloe that caught my attention first and following that, the dry was also very impressive. I decided it was these I should write about and got in contact with Hernö to tell them so, to which they kindly sent me some information to get me started.

Now it seems I’ve been a little slow off the mark as Hernö are well up there, being the most awarded gin in Europe during the past 3 years running. They hold various awards for everything from the Master Distiller, to the distillery itself, let alone a collection of awards for all that glorious gin. In 2016 Hernö gin was awarded the World’s Best Gin for Tonic and Gin Producer of the year by the renowned IWCS.

There’s a lot of the gin too. The dry has several sister varieties, Old Tom and Juniper cask along with stronger Navy Strength, as well as flavoured gins such as the Sloe and the Blackcurrant. After trying the Sloe, I am super keen to try the Blackcurrant and perhaps try cooking with it as I can imagine it would add a gorgeous punch of flavour to fruit pies and desserts and perhaps reduction jus for dark meats.

Hernö’s story began in 1999 when Jon Hillgren went to London to bar tend and quickly fell in love with gin (well, who wouldn’t). After a lot of research, he founded the Hernö distillery in 2011. It was not only Sweden’s first gin distillery, it was also the world’s most Northwestern gin distillery. That’s quite a title. Another impressive title is that of Gin Grand Master which Jon has won twice since releasing his first gin in 2012.

The distillery is quite beautiful. Housed in a traditional Swedish Manor in wood that’s painted red and white, it has been built in the North of Sweden in the village of Dala, which is just outside the City of Harnosand in Angermanland. The area is officially one of real natural beauty and Jon takes inspiration from this in order to create the gin; clean, fresh and natural. 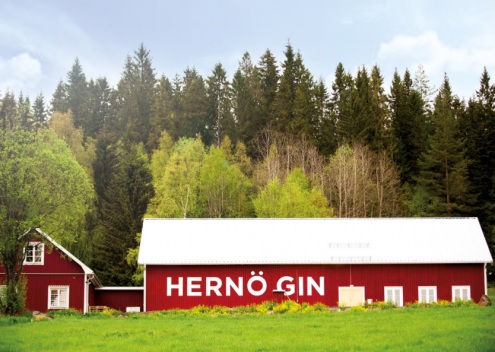 The process in which the gin is made is a careful one. Using the single shot method, the gin is made with only natural and organic botanicals and the wheat base spirit is distilled twice. Once it becomes vodka and the second time it becomes a gin by being macerated with juniper and coriander for 18 hours before the other botanicals are added and the batch distilled into that delightful London Dry.

The dry gin has a wonderfully delicate and complex flavour, serving as an ode to the attention it receives during the entire distillation process. There’s a smoothness, with the lingon berries and meadowsweet pushing for a floral flavour, a flavour that works brilliantly with the citrus and follows through into a slightly spicy finish.

The Sloe Gin is made from the London Dry base and is bottled at 30%. I really enjoyed sipping it neat, the berries give it a lovely spice, reminiscent of a good port. I finished this bottle all to quickly and am pleased to report it is one of my favourites of the Sloe Gins, only challenged by Monkey 47s variety.

If you’d like to know any more about Hernö, or more importantly buy some of their lovely gin. You can visit their website here.

I just need to try the others now…and perhaps book a trip to Sweden to enjoy it in it’s natural habitat. Authenticity, right?

All pictures care of Hernö Distillery. Thanks ever so much for the information.