One of the things that really hooked me into gin in the first instance was the enormous wealth of stories. It was all the history, the incredible tales that were being unearthed by distillers and brought to the public eye as the heart and soul of their product. Stirling gin have created a lovely little thing with their folklore collection, two delightful offerings in the form of gin liqueurs that have been born through two fantastic old stories.

The first is the Red Cap, a delicious gin liqueur made with Stirling’s own gin and Scottish raspberries.

If you meet a wicked Red Cap on your walk through the countryside you may find yourself spirited away to the fairy realm, a place of ghosts, magic and bloody mischief. We just hope you can find your way back.

The legend of the red cap comes from border folklore set around the Anglo-Scottish borders. The Red Cap was said to be a short, thick man, also said to be a goblin. He tended to inhabit castles on the border that had experienced wickedness or tyranny. The red of the cap comes from the act of soaking up blood of his victims. Apparently if you are unlucky enough to come across this creature, you can drive him away by quoting scripture and he’ll burst into flames leaving a tooth where he once stood. You can find out more about him here. 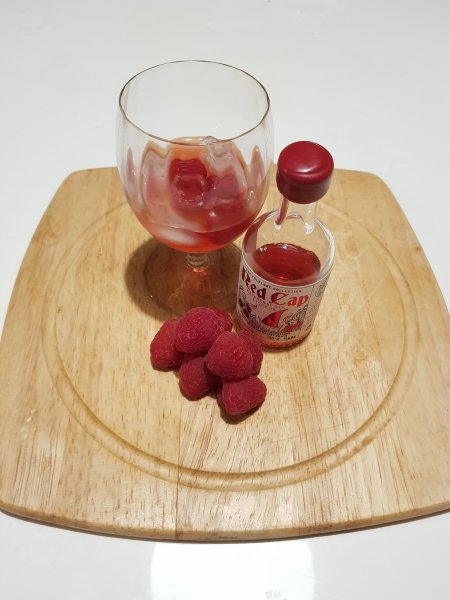 Well the drink itself. 25.5% and a vivid red, which as you can see from the photo is not far from the red of the raspberries themselves. I kept it simple, pouring it over ice with a few raspberries for good measure. The raspberry taste is very natural and you also get a heavy hit of juniper which along with the ABV, gives the liqueur a lively punch. There is a slight viscosity to it and it’s a wonderfully rich drink over a a good amount of ice. The recommendation is over ice or in a bit of bubbly and I was most disappointed that my house is currently bubbly free, as I believe it would excel as a combination.

As for the Green Lady, this is a more unusually flavoured bramble and mint liqueur.

Often seen in the grounds of Stirling Castle, the ghost of the Green Lady likes to watch the townspeople go about their business. Once an attendant of Mary Queen of Scots, she perished in a fire while saving her Queen.

The Green Lady is a sad tale from Stirling Castle of a young highland girl who attend Mary Queen of Scots. She was a superstitious lass and became convinced that there was going to be a fire and spent the night awake for the Queens safety. The night was long and despite her efforts she succumbed to tiredness, falling asleep and setting fire to the queens curtains with her candle. Mary survived the incident but the poor girl died. It seemed her concerns had been misplaced and perhaps you can’t change fate after all. I researched the story of the Green Lady here. It’s a very interesting post that also documents the other ghostly ladies at Stirling Castle.

As for the liqueur, it’s 24%, and a lovely deep ruby colour. Delicious bramble and mint, just the thing to make potions with. Considering the flavours, we’ve got a nice little, simple twist on a Gin Bramble on our hands. I poured mine over a lot of ice and lemon slice and gave it a little swirl. Again, the flavour has a good hit to it so I added another slice of lemon to cut through it but it was lovely. Amongst those berry flavours the mint is bold and fresh, which gives a great vibrancy to the flavour. Lots of ice and lemon and this liqueur sings a beautiful song.

Reading up on Stirling gin, they have an interesting story. You can find out more about them on their site.

The labels of the bottle are absolutely worth a mention, created by artist Ritchie Collins, based on the shores of Leith. The artwork is beautiful. There is something mysterious and almost somewhat sinister about the black line work and vivid red and green foil filling.

The 50cl bottles cost £24.99 + £2.95 postage and are available to buy from Stirling’s online shop. They’ve got a great site and a great many products on there so do have a little forage and maybe you’ll uncover some more of the magical and the mysterious.