Negroni Brownies. “Exsqueeze me? Baking Powder?” (one for the Wayne’s World fans).

What an absolute treat!

Negronis have shot up the popularity chart in the cocktail world in recent years, establishing a rather fanatical cult following. And I am one of them. Being so bitter, they are an acquired taste, but when you do acquire it, they satisfy in a way that some cocktails can only dream of. Made simply, they are equal measures of gin, sweet vermouth and red bitters. However, you can dress them up as much as you want, varying spirits and ratios. If you’re looking for Negroni ideas then check out Negroni, a book by David T Smith and Keli Rivers, which tells you everything you need to know about the drink, as well as offering over 30 different recipes to try.

Negronis are dark and bitter sweet, so a recipe for Negroni brownies has to be up there with other strokes of genius. This recipe is another one from the Liquorsmiths Cookbook and it is a real doozy!

First up, the night before, make your Negroni (the recipe calls for 50ml Old Tom 6 gin, 25ml sweet vermouth and 25ml red bitters, but I used 50ml equal measure for all). Old Tom 6 gin is magnificent. In fact, it’s so good it recently won a ‘Masters’ at the Spirits Masters 2021. The traditional profile is put together wonderfully, with a hint of scotch bonnet on the finish. Put your dried cranberries in to soak and cover. I usually pop a plate on top as its easy to wash up and saves on foil/clingfilm (the less of that I can use, the better). I’d recommend making two lots of Negroni, using one for the cranberries and one for yourself before bed, but I’ll leave that up to you.

The next day, it’s time to make the brownies. Have a quick sniff of the cranberries before you start as they will be smelling absolutely amazing! Now, I ended up mixing up the stages of this recipe a bit, but there we are. Firstly, I sifted and mixed the dry ingredients (flour, cocoa powder, baking powder and salt). Then I put the butter and sugar in my stand mixer and set that on low, whilst I beat the eggs and the extra yolks in a jug. After five minutes a slowly added the egg to the butter/sugar mixture and left the stand mixer running a couple more minutes. During this I stuck my chocolate in the microwave to melt.

Once the chocolate was melted, I took the bowl from the stand mixer and began to fold it gently into the mixture. Then I folded in the dry ingredients, then the cranberries and leftover Negroni. The mixture will be beautiful and will smell divine as the spirits meld with the bitter chocolate. Spread this into your cake tin and you are ready to put it in the oven. I only had a 20cm square tin so went with this and it worked ok, other than the brownies were a little deeper so I should have allowed a little longer in the oven.

The recipe states 25-30 minutes and I checked after 25. The mixture still seem quite wet in the middle so I left it a little longer. On retrospect I should have given it even longer than that as they still came out quite wet in the end. Once you remove the tin, put that tin inside a larger one with cold water and ice. The idea with this is that it cools the brownie, which stops further cooking inside and prevents it drying out.

Once they had cooled I cut them up. I cut mine into nine pieces and let me tell you, you want to cut them smaller! These bad boys are super rich so less is more. Small squares for the win. With my greedy eyes I cut larger squares and couldn’t finish it…though it made for a nice breakfast this morning. If you’re serving these as a dessert I’d suggest small squares of warmed brownie with a scoop of cold vanilla ice cream. Thinking about it, you could make your own vanilla ice-cream and crumble this into the mix. Or maybe chocolate ice-cream…now there’s an idea!

So, what do these taste like? Devilishly good. Dark chocolate and Negroni really is a match made in heaven. As for the gin? That little kick of heat works in a treat in this dish, and it makes an incredible red snapper too.

If you liked the recipe then be sure to check out the Liquorsmiths Cookbook. It contains 100 recipes that are kissed by gin, rum, whisky or vodka. It’s laid out simply and easy to understand, and there are all sorts of tricks and tips throughout.

Buy Me A Drink
Newsletter 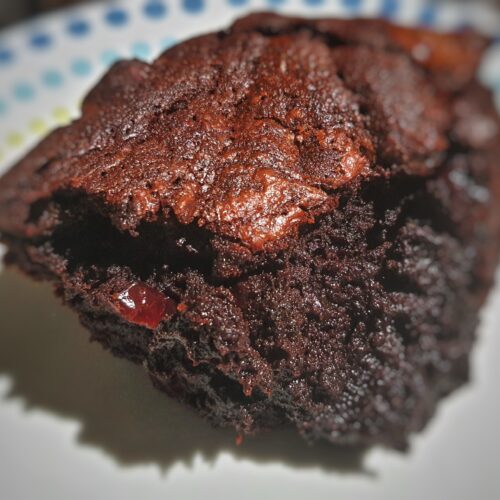 Rich and decadent, these brownies are an indulgent fusion between dark chocolate and the beautiful bitter sweetness of a Negroni. A cocktail in your dessert? Have your cake and eat it.
Print Recipe Pin Recipe
Course Dessert, Snack
Servings 12

This recipe is my attempt at Negroni brownies from the Liquorsmiths Cookbook. I’ve listed the recipe details as stated in the book, and have noted any tweaks I have made.
Keyword brownies, cake, chocolate, cocktail, cranberries, negroni, sweet