I’m doing this in a slightly higgledy piggledy fashion this year, due to snatching times to write. Last year gave me a little time in the mornings to sum up the day before, this time I’ve got more people to see, which is a great thing, but that means less time to write. The plan is to cram it in here and there and after the event I’ll have a couple of days to get back on track.

So, where were we?

I took a stroll downtown for the Chinese New Year Parade. San Francisco is just amazing for the sheer size and scale of their events. The Chinese Lunar New Year Parade is massive and the largest of it’s kind outside of Asia. Seeing the community come together to enjoy the parade was wonderful and the bright colours and rich smells of Chinese food really brought life to the culture and it was beautiful.

I posted up in a little bar called Sutters Saloon, waiting for my friend, Kristy, to get down from Pier 39. Little did I know that this would be the start of a whirlwind adventure of a day, and an evening that would change the course of the trip. We get chatting to some people in there who were visiting from Philadelphia and Florida. The drinks started to flow and over a few hours I had tried my first White Claw (hard seltzer), Mezcal Old Fashioned, a Limonchello that tasted like lemon meringue and several St Georges (which had to be done, obviously!)The staff there were so hospitable and I thoroughly recommend stopping in there. These good times were intermittently interrupted by my dashing outside to watch parts of the parade that was passing right outside the bar and took about 3 hours to pass it completely, it was huge!

Golden dragons danced around the large blasts of firecrackers. The firecrackers were incredible! Enormous explosions echoed off the walls of the downtown high rises, bouncing down the streets and up into the sky. Music played over the noise, and the relentless beating of drums kept a rhythm that carried the parade of floats and dragons and dancers along. The efficiency of the operation was mindblowing, with huge streets being shut from downtown traffic for the day, and the procession was followed by street cleaners who returned the streets to normality as if nothing had happened, whilst firecrackers continued to explode in the distance. 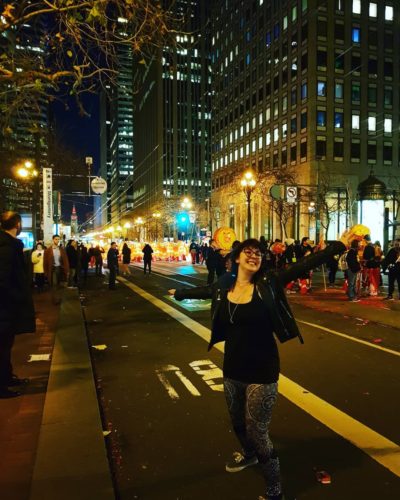 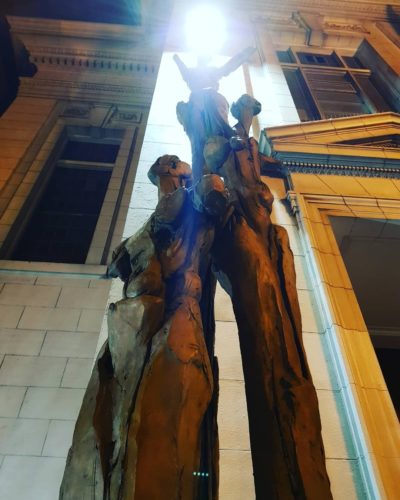 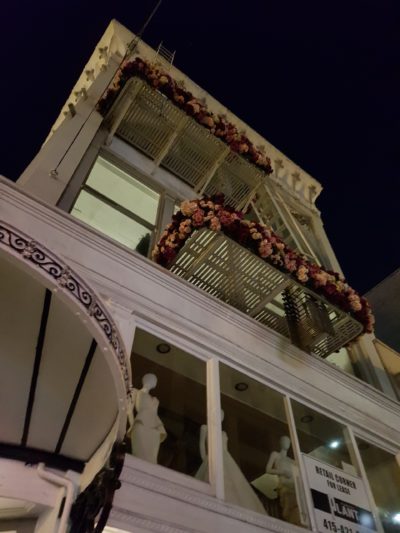 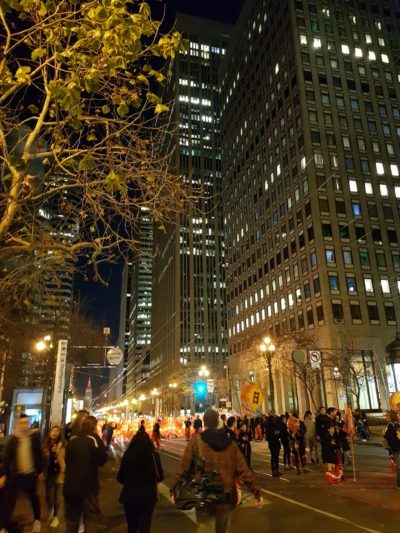 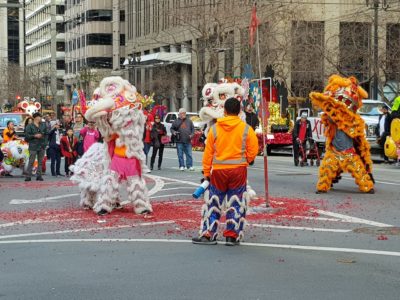 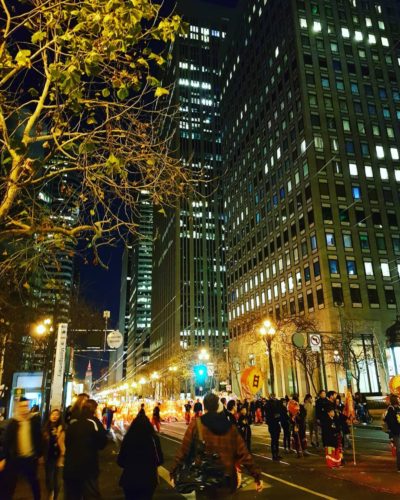 By this point we were all a little woozy, so took a trip up to the Owltree Bar which is a great little spot for a cocktail, and before long the group we were in grew and we went across the road to Coco Bang for some Korean fare. Korean food is fab! It’s really popular here and it’s no surprise with the rich, aromatic flavours. Those lovely people who invited us to tag along, thank you so much for your hospitality! It was really kind of you to take us under your wings and show us a good time. At this point we were drinking beer with Sojo (Korean rice wine) bombs. And this apparently, was the beginning of the end!

After a great night I began trotting home then had the terrible realistation I did not have my phone or my purse. Now, as a youth I was terrible for losing things, and intermittently I still will now. However it has been quite a long time since the last incident so I’m not beating myself up too much. Losing those things overseas and only 2 days into the trip could really spoil things if I let it. But hey, I’m a pretty resourceful girl so I got directions and found my way back to the hostel, and after another great night of late conversation with residents there, I managed to get three hours of sleep. A lovely lady promised to watch me if I rested my head on a sofa in the common room as I was nervous that without my phone that I’d miss breakfast. So, I got some sleep, with the intention of hatching a plan in the morning.

So, Day 3, and time to sort out day 2.  Let’s just call it ‘the Hangover’ After breakfast I got online to chat to Kristy and discovered that there had been another bar after Coco Bang and no one could remember the name of it. You’ve got to love a mystery. I found a most excellent trick on google ‘find device’ and confirmed my phone was still in Coco Bang! Hooray! I checked out and went out into the City, armed with a map. I had some money from room deposits etc, so I made my way down Kearny Street to the beautiful Yeubu Gardens and the Samovar Cafe, where we had brunch. Eggs Royal had to be done and the smoked, flaky salmon that sat underneath the dreamy, creamy eggs was delicious. Kristy was a babe. Not only did she sort me out with getting things and my transferring her money, we got some bits we needed at target, and had a G&T at her hotel and she made me feel a hell of a lot better for my troubles. A friendship has been forged for life there. We’d arranged to meet someone at Coco Bang at 4pm. It was all coming together. At 4pm we went and discovered they had my phone, but not my purse! It was a rather crushing disappointment. At this point we had to take a lyft over the Golden Gate Bridge and to Tiburon. Now armed with my phone, I froze everything and checked through the transactions of the cards looking for clues. Aha! The name of another bar! I rang them and they were closed but I spoke to the owner last night, he’s going to check with the staff if they’ve had it handed in. If so I can totally grab it in a few days. Just knowing its safe would be great, if not, hey, these things happen, no one has spent anything on my accounts and I’m surrounded with good people at the ADI who have offered to help me out with taking money out for me if I transfer it. Essentially, we are all good here.

So, on arriving here in Tiburon, I was overwhelmed with joy at the comfort and indulgence of the room, the huge bed, the private bathroom and the coffee. After the fun of the hostel it’s great to have somewhere to relax and get some catch up time. I rushed to get ready and sat through some vodka training. It is such a great group! It’s a lovely little family of people with a real passion for spirits and such a warm reception too. We had a little soiree with a free bar and nibbles including potato and mozzarella croquette bombs that were absolutely incredible!! It was great catching up with everyone over a few cocktails and there are some wonderful newcomers this year too. It’s such a great event. A late night chatting next to the outdoor fire drew to a close and I put myself to bed in earnest, only to awake at 3.30am. I thought I had a handle on the jet lag this year but oh no, it’s is pretty fierce! Last year I had a few more days before the event so it had settled quite well. This time, I think, I’ll be a little out of sorts for a few days and probably settled in time to come home.

And here we are. The first day of judging. it’s now 5.30am here, 7.30pm at home. I’m going to get up and get ready for breakfast. What does today have in store? Who will I be judging with? Will I find any great spirits? Will I find my purse? Stay tuned for the next exciting installment.